Fisterra as it is called in the local language (Finisterre in Spanish), translates directly as the End of the Earth. It is found on the Costa da Morte – the Coast of Death. Doesn’t really sound like a very promising tourist destination, huh? Fortunately for us that meant that one of the most beautiful ocean side villages in Spain was not overrun by tourists and we could enjoy it as such.

Fisterra is also a cute little fishing village, full of buildings painted bright colours overlooking the port which brings in most the GDP for this area and feeds part of Spain, Portugal and Europe’s fish needs. It is one of the most western points of Europe and hence why it was called the End of the Earth – before Columbus discovered the Americas everyone really thought this was the end of the earth.

Very few people who walk the Camino de Santiago actually walk this far (there are paths if you want to), and we weren’t a part of those few. We caught a bus and travelled over 100km in less than 2 hours. It was such a revelation to cover so much distance in so little time, as we were only averaging 20km per day during the Camino de Santiago. After spending 6 weeks without seeing the ocean once, the bus trip teased us with fleeting views of the sea, before we burst right out onto the wild coast road. I was so excited to see the sea again, 6 weeks is a long time to be landlocked. It was a relief to dip my toes in the cool water of the Atlantic Ocean.

As Fisterra is on the Atlantic, the coast can be quite dangerous with very changeable weather, but we were only treated to a change from an overcast sky to brilliant sunshine. And in perfect time so we could watch the magnificent sunset with a cold beer, overlooking the lighthouse at the end of the peninsula. 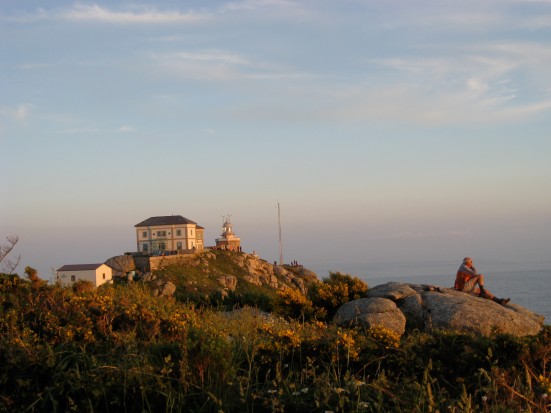 To complete our time here we decided to do just a little 30km walk to another town, Muxía. It was one of the most beautiful legs of the Camino de Santiago, we only saw about 5 other people on the way and the path was so underused that we had to take our shoes off and hop across large stepping-stones to cross a river. Although I was greeted to Muxía by a dog that was about to attack me to get the walking stick I had in my backpack, Muxía was a quaint, sleepy seaside village and worth the walk. It was a nice way to say goodbye to the Camino and walking every day.

4 thoughts on “The End of the Earth”