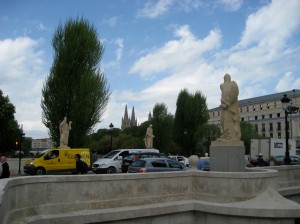 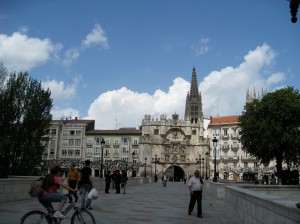 Before we had even arrived in the centre of Burgos, we knew where it was. The spires of the gothic cathedral marking the centre of town tower high above all the other buildings in the city. It draws you in and amazes you when you finally arrive beside it. It is so grand, yet the details carved into it are so intricate. Even without any religious affinity, this cathedral is very special and makes Burgos well worth a visit. 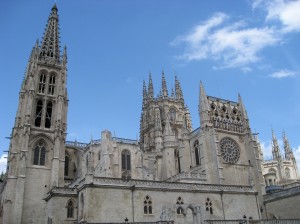 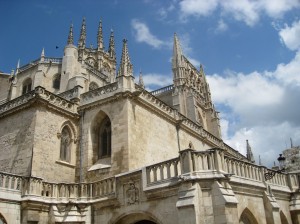 It didn’t take more than two hours in Burgos before I was asking Justin if he thought we should spend another day there to look around. He certainly didn’t need any convincing, partially due to the fact that we had stumbled upon the best vegetarian restaurant since our favourite hometown café, Kokako in Parnell. If you ever get to Burgos, I would highly recommend searching out Gaia restaurant, whether you are vegetarian or not you will be impressed. It’s only a block from the cathedral – much better than the overpriced, touristy food you will get there. After a delicious four course meal and wine we were ready to explore the city.

The promenade along the river is perfect for people watching in the evening, especially as the weather was beautifully hot and sunny. Burgaleses young and old were out walking their dogs, talking to friends and showing off their new clothes. The main square was no different. I am always amazed to realise it’s 10pm when the sun is still up and the main square is full of children playing. It’s so normal for Spaniards, but so unusual for most other cultures.

Although so far in the Camino we hadn’t met too many young people (most of them do the Camino from May on – when they finish University for the year), we made some really cool friends in Burgos, a German and two Spaniards. One of them was the Spanish version of Jermaine from FOTC (Flight of the Conchords – if you haven’t seen it you are missing out). He was from Barcelona, but looked and acted just like Jermaine, even the small expressions he made were identical to Jermaine, but Spanish! Unfortunately after dinner, a few drinks and a lot of laughs we had to say goodbye to them as they were cyclists. Cyclists travel about 60-100km per day, so they would be finishing the Camino before we even got to León, the next big town on our journey. 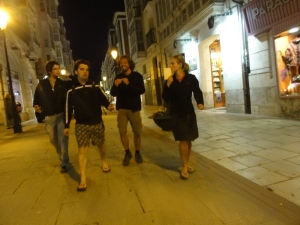 Burgos is not a very big city, so after wandering around the beguiling backstreets of the Old Town, we had to attend to things we would need for the rest of the Camino, or at least for the next 10days or so when we would arrive in León. Having been caught in the rain on our way to Los Arcos, the most important thing we did in Burgos was buy ponchos. Little did we know just how useful they would be in the coming weeks. 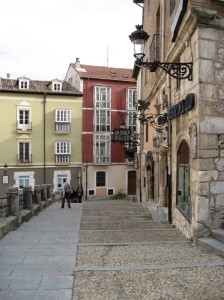